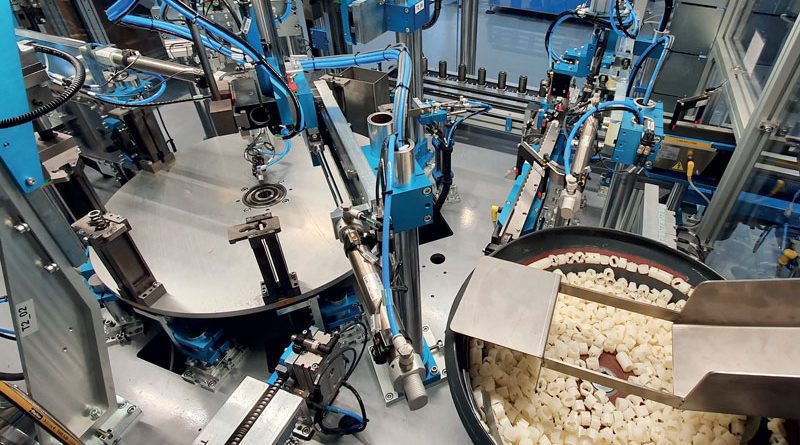 Many of the objects we use in our homes are the result of an assembly which has been thought out in great detail; for this to happen, there must be machines designed specifically for certain operations, ‘tailor-made’ for each component to be assembled. A.Matic, with twenty years of experience in the field, has recently developed a machine for the assembly of hinges for dishwashers for a US company in Tennessee, with which A. Matic worked totally remotely.

A.Matic, a company founded in 2001 in Annone di Brianza ( near Lecco) following an idea by Luca Colombo, has recently developed an assembly system for dishwasher hinges for a US company. “Like all the machines which A. Matic produces,” Luca Colombo explained, “the starting concept of the machines is totally customised; under this common heading, there are some parts which we consider standardised and use in many of our applications, but which are customised in the part processing the specific component. This is how the machine we developed for a manufacturer specialising in components for the white goods sector was developed; it will assemble the hinges for dishwashers”. This sophisticated equipment consists of electric axes, pneumatic drives and mechanical riveting systems, designed to carry out many delicate operations on fourteen small components in an almost fully automated process.

“The line assembles a rather significant product,” Luca Colombo reported, “as the hinge has a footprint of 40×30 cm and a thickness of 4 cm.  Two components, the main body and the arm, are loaded by the operator, another twelve components by means of vibrating or hopper systems, or by selection at the exit, depending on the component”. The machine has been developed to assemble hinges which come in left and right-hand versions. “Four components to be assembled,” explains Colombo, “also exist in a mirrored version, so they are different from each other even if they have the same function; this means that the operations cannot be identical”.

The requests received by A.Matic were for a line enabling the production of 1,000 hinges per hour and the presence of two operators, one dedicated to the manual loading of the two components onto a buffer, and another to supervise the operation of the machine and all its automatic part. “Always keeping the customer’s production objective in mind,” Luca Colombo explained, “A.Matic focused on the development of a system which would allow the operator to load two different components without his movements affecting the machine’s operation: in this case, it is the machine which sets the pace of the work, but the operator does not have to keep up with its speed, but only position the components, which will accumulate, and then the machine itself will automatically use them up. We therefore designed two buffer systems to break the link between the operation of the machine cycle and the movements of the person”.

Not an easy line, therefore: the operations to be carried out are not obvious, and the design challenge does not stop at an adequate manual loading system; the two components to be loaded manually are actually part of the group which must be managed in mirror image mode. “The buffer system, therefore,” Luca Colombo explained, “must be able to manage both versions with almost zero set-up. The second important design challenge we faced was the speed and flawlessness of the changeover from ‘right’ to ‘left’ machining, thereby making the machine capable of being set up fully automatically to produce the two versions”. A.Matic worked in such a way as to enable the machine to “ get organised”, thanks to the codes inserted in its database, each corresponding to the type of product to be machined: the equipment can recognise the corresponding one, and sets itself automatically. “There is no vision system,” Colombo explained, “but it is the operator who selects on the panel what the machine is going to process, that is, what type of product. Once the machine is started, it sets itself automatically and starts assembling the components in complete autonomy”. Obviously, the machine is able to understand if there has been an error in loading or positioning parts, thanks to trap systems which check that the component matches the device automatically activated by the machine. “There are component arrival points,” Colombo pointed out, “which are self-adjusting to receive the component; if the part does not fit into the correct position, the machine signals the error and does not produce rejects, but intercepts the error before it is too late”.

Another request from the US company where the assembly plant was installed concerns the return spring inside the hinge, whose purpose is to balance the weight of the dishwasher door, which is never left free to fall but is braked and counterbalanced by the spring system. This means that, because doors have inherent differences, the counterbalance system is specific to the door to which it is to be applied: as a result, there are different categories of springs, in this case 20 sizes, but it is possible to have up to 40 different products. “What they asked us to check,” Luca Colombo said, “was that the hinge entering the machine was actually the one required in the product code specification. Within the codes entered in the database, therefore, there is not only the ‘right’ and ‘left’ specification, but also the type of spring, that is, its strength. All the springs going into production are tested and checked to ensure they correspond to the initial specification before assembly, in a control station: if the machine detects a mismatch, the wrong springs are automatically separated, without stopping production and without generating waste.”

When managing this type of product, artificial and digital intelligence play an important role, since everything that is fed back to the stations is linked to software functions. “As already mentioned before,” Colombo said, “the operator, through the HMI, starts the assembly of a component by selecting the specific code within the database, and by simply clicking on it, functions are activated on the machine linked to management software parts: for example, the monitoring of the positioning of the spring control stations, or the QRCode marking on the hinge, which allows total traceability”. From the QRCode, it is possible to extract, thanks to a reader software, a great deal of information on the product, such as the date of production and the batch; this makes it possible to carry out a very thorough backward traceability, even years later.

Digitisation has had advantages which went beyond purely technical and design issues: they have enabled an entirely remote commissioning of the machine. “For about a year and a half,” Luca Colombo explained, “it was not possible to enter the United States, so all operations had to be carried out from Italy, while the machine arrived in May 2021 in Tennessee. The remote commissioning was very much linked to the fact that the machine was structured to have an artificial intelligence management, which allowed the supervision from Italy”. As soon as the machine arrived at its destination, A.Matic started a series of daily sessions with the customer: instructions were prepared from Italy, sent to the US and explained to the team, who carried out the required operations and sent feedback. In this way, within ten working days it was possible to start the machine, make the customer independent and start production. All the acceptance and machine approval phases,” says Luca Colombo, “were carried out remotely, using web-call sessions and cameras on the plant to share the results of the operations, as well as the training sessions. The customer was guided from afar in positioning the machine and preparing for operation, after which the plant was started up to check that its performance was as designed; finally, instructions were given to the operators to enable them to manage the plant in complete autonomy. Now that the situation seems to have calmed down and the borders have been reopened, we have a commitment with the customer to go and see the machine ourselves”. Although today’s technology is very advanced in this respect, this result could not be taken for granted: A.Matic’s complex plant required nine months of design and manufacturing, so it was not easy to make a manufacturing company with no internal staff with machine-building skills autonomous.

The remote work, however, is not over yet. “From Italy,” Colombo explained, “we can access the machine software remotely, once the customer has authorised us, and carry out control and maintenance operations. This arrangement is very much appreciated by our customers, because it provides the possibility of practically immediate intervention for any abnormal condition which may occur. Very often these are problems which can be solved in this way, but even if it is necessary to take action on site, being able to carry out remote diagnostics speeds up response and operation times”.

A.Matic’s work with this US customer has been successful, so much so that the company has requested another assembly line for a different product, which will be delivered at the beginning of 2022. “This time,” Luca Colombo stated, “we should be able to implement the right mix between on-site and remote control: a technician will visit the customer for commissioning, and we will take advantage of the remote connection to have the rest of the A.Matic staff present virtually. So it will no longer be necessary to send a whole team of technicians, one will be enough, while the others are connected remotely”. This does not, however, eliminate human contact, which remains extremely important. “We always intend sending someone to see our customers,” explains Colombo, “but the skills acquired during this year and a half of social distancing can be added to those we already had. In practice, it is an optimisation of the service we provide to the customer”. 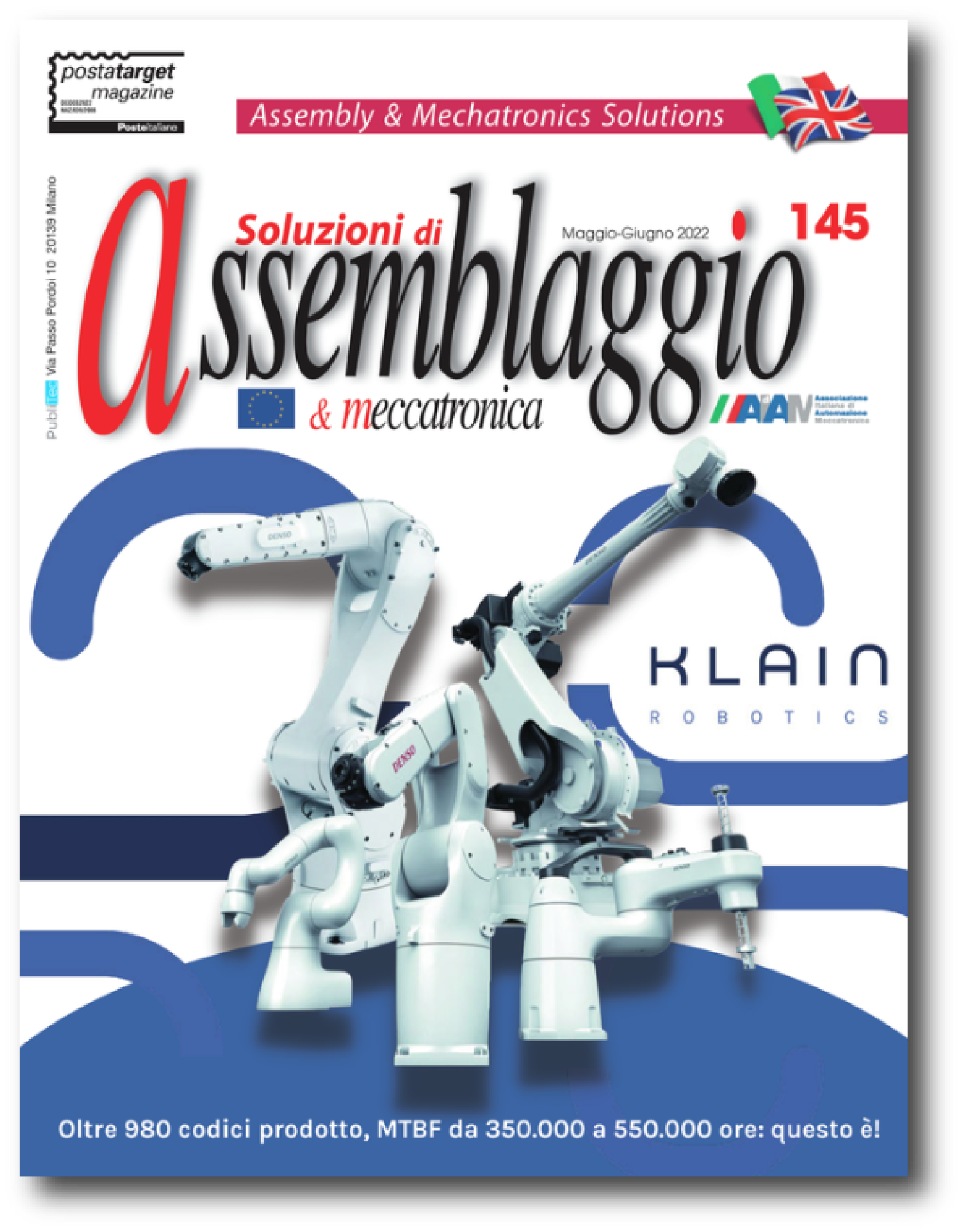