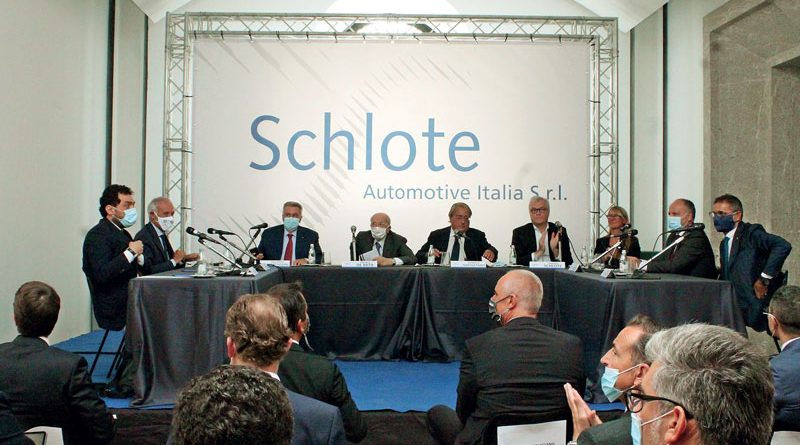 SAI Schlote Automotive Italia, an Italian-German partnership between Schlote, Sira Industrie and Bohai Trimet, has activated the first production line of the new plant in Nusco, Irpinia. An industrial challenge launched in the middle of a pandemic to supply die cast aluminium alloy components to the major European car manufacturers

Germany and Italy. A new bond in the name of technological development in the automotive sector starts again in the heart of Irpinia. The protagonist is SAI – Schlote Automotive Italia, the company created at the beginning of 2020 from the partnership of three important industrial groups which will produce gearboxes, clutch boxes and other aluminium alloy components for the major European car manufacturers. As was announced at the beginning of September during a conference at the Goleto Abbey in Sant’Angelo dei Lombardi (Avellino), on the occasion of the presentation of the new company and the new plant in Nusco, the first of the five planned production lines has been in operation since October, while the selection and hiring of personnel continues to complete the workforce of 150 employees needed to operate the new plant at full capacity. “The company is already working on pre-series and sampling, before starting supplies for Schlote: we are in full swing,” Sira Industrie president Valerio Gruppioni, partner with Sirpress of the Italian-German joint venture, told a local newspaper. “This is an important operation, strongly desired by Sira Industrie, which, thanks to important partners, will be able to become a flywheel for the economy not only locally but also nationally”.

The relaunch of the automotive hub in Irpinia

The details of the industrial operation resulting in the SAI newco were illustrated on September 2nd at the conference in Sant’Angelo dei Lombardi, where the partners of the joint venture discussed with local politicians, entrepreneurs, associations and representatives of civil society. “We decided to make an investment in southern Italy because we have the right partners on site, the right companies,” Jürgen Schlote, CEO of the Schlote Group, declared. “Our company is involved in the mechanical machining and production of precision components, such as gearboxes and clutch boxes. This is what we want to do here in Irpinia: produce high quality components for our customer Magna’s Bari site, which in turn will deliver the finished parts to the major automotive industries, such as Daimler, Renault, BMW, FCA. The production we are keen to develop in Nusco will have an annual production capacity of one million parts, for a planned investment of 52 million euros in technology”. A production site of 40 thousand square metres, 14 thousand of which are covered, 150 technicians and workers who will be trained with internships in Italy and Germany, five fully automated production lines, ten machines for each line and a turnover of around 70 million euros when fully operational: these are the figures in the five-year industrial plan of the SAI operation.

The joint venture was promoted by the top management of the Sira Industrie group, already present in the Irpinia area with Sirpress, the group’s company specialising in the production of die cast aluminium moulds and castings for the automotive industry. President Valerio Gruppioni involved Bohai Trimet, the German company of the Chinese BAIC group, specialised in the production of components for the automotive sector, and above all the holding company Schlote, leader in the production of components for chassis and car transmissions, based in Harsum, Germany, which has become the majority shareholder with 60% of the capital. The idea of the company came about during the most difficult months of the Covid-19 pandemic. It is in this scenario that SAI – Schlote Automotive Italia showed that it is possible to reverse the trend of industrialization in Southern Italy. Compared to the current market situation which sees the use of social shock absorbers and in the worst cases redundancies, SAI is ready to hire engineers, technicians and local workers. “We are making a big investment in this area because we believe that this land has great potential, we are building a factory with a capacity of one million pieces per year, high precision and quality products and they will be available to all European motorists with the aim of involving Mercedes and Volkswagen in addition to the existing manufacturers,” Luigi Mattina, CEO of Bohai Trimet, underlined.

These investments are once again providing new energy to the industrial supply chain sector, as Maurizio Marchesini, vice-president of Confindustria with delegation to supply chains and medium-sized enterprises, pointed out: “This initiative shows that our industry is vital, that even in difficult times, the industry is able to overcome the hardships of the moment. In particular, this is a very important supply chain operation: the world is changing, there is a different globalisation, supply chains are shortening, value chains are changing, the important thing is to have international partners where this value is created, and this operation is also important from this point of view. And it is a strong signal for the whole country: at this stage we need everyone’s commitment, also to avoid widening the gap between the southern and central-northern regions. Industry is the driving force behind development and the motor to get out of the crisis triggered by the health emergency and investments are the lever on which to act to increase employment and relaunch the economy”.

The launch of SAI is a particularly happy occasion after months of negative events and productivity with very high deficits which have affected the automotive sector, as Paolo Scudieri, president of Anfia (National Automobile Industry Supply Chain Association) and owner of the Adler Group, pointed out: “I think it is a moment of joy because it marks a renaissance in the automotive sector, overwhelmed by the collapse of registrations which in May reached -84% before rising to -0.4% in August. It is the time to invest, the time to grow in size, to strengthen companies to be strong supply chains, companies abreast of the times and connected with the world. Unfortunately, in the automotive sector, ‘small’ does not correspond to ‘beautiful’, but it is time to close the critical size gap which still exists with respect to some international companies, and now is the time to do so. This crisis has been unique, because not only has Italy experienced negativity, but the whole world has gone through the same negativity uniformly. So if there are opportunities, there are opportunities all over the world. Now is the time to increase the size of our companies”.