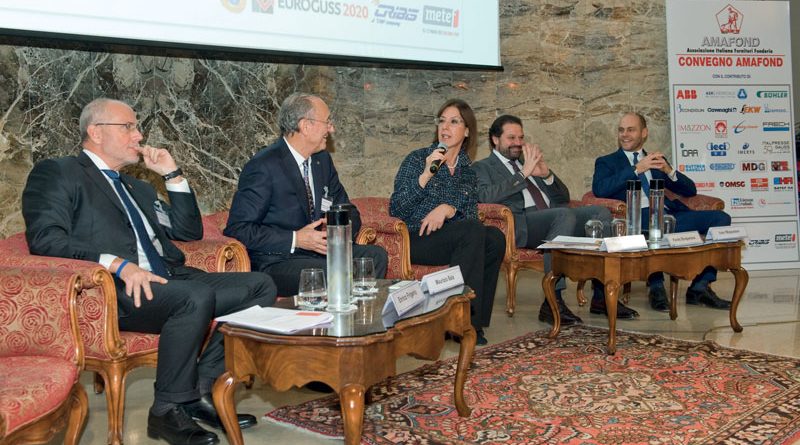 At Amafond’s great Annual Convention, held on November 29th at Villa Fenaroli in Rezzato (near Brescia), we met the Association’s President Maurizio Sala, with whom we exchanged comments and opinions on the general state of the system in which Amafond is specifically moving, on the outlooks and expectations of the entrepreneurial world. The event which has become an appointment not to be missed for the industry, was attended by an extraordinary amount of Italian and foreign operators of the segment, and it suggested a program of relations at the highest level on pressing technical and economic issues, presented by internationally renowned speakers. A very significant moment was the awarding of the traditional lifetime achievement prizes destined to companies and professionals who stood out in the segment of metal foundries, awards which this year were conferred to Fabio Boccacci, Fonderia Boccacci, La Spezia; Luigi Sala, Fonderia della Crocetta, Cinisello Balsamo; Sergio Gnutti, Eural Gnutti, Rovato; Maria Grazia Facchinetti, Lumpress, Lumezzane; Mario Magaldi , Magaldi Group, Salerno; and Claudio Clavedon, Primafond, Thiene. We shall discuss the themes of the Amafond congress in the next issues of A&L, considering even the indications and comments of President Sala.

How do you envisage the economic situation in general and the trends of your reference market?
The global economic context is definitely even more weathered with respect to its situation a few months ago, which was difficult enough; the economic situation for metal foundries and for suppliers like us has objectively become worse, both for those operating in the ferrous metal industry and for those working in the light alloy sector, even though in the latter segment the picture is highly varied. I must say that as early as the end of 2017 we began pointing put the risks of a return to protectionism connected to the tariff war: it had been easy to forecast that a perverse spiral would have started, which in the short term generated some positive results but in the medium and long term will only bring negative results for everyone. Today global trade is slowing down considerably and processing countries suffer, suffice it to consider the market deceleration of German, and consequently Italian, manufacturing, the two being closely interconnected by means of common value chains, as in the case of the automotive industry. The deceleration in growth led central banks to change their orientation and we moved from policies which supported the economy to a horizon of lax monetary policies for ancestral fears, contamination dangers and apprehensions which have not yet been overcome.

Is the automotive crisis entirely to blame?
Figures are clear, the production of cars in Europe 10 years ago was equal to 27% of the global amount while today it dropped by 7 points. Regarding Italy, the most recent data regarding industrial production show a relevant deceleration of the domestic automotive industry, from -11.4% in the fourth quarter of 2018 to -9.5% in the first quarter of 2019 to -9.7% in the second quarter, and the same goes, of course, for the parts and accessories production segment.
We should remember that the automotive industry in our country includes roughly 6 thousand companies, many being SMEs, with about 160 thousand direct employees which go up to 250 thousand including connected industrial companies. The segment represents roughly 7% of the total of employees in the entire Italian manufacturing industry, and 5.6% of Italy’s GDP, we are talking about a production value of 93 billion euro, 24 billion being exports. Because of this turbulent change of trend, many Italian companies and thousands of employees are now facing a very serious risk. It is true that the issue is European, but a trouble shared is not a trouble halved: it is a very serious illness with heavy repercussions on the job market.

Is the issue the automotive crisis, or uncertainties as to the future due to the great upcoming changes on propulsion technologies, infrastructures, new assisted driving techniques?
It is clear that the stakes are very high, the struggle for supremacy is fierce, with no holds barred and no rules. Regarding full electric and hybrid power trains, China and Asia are in evident advantage thanks to their monopoly of components essential to cell production, as well as of the relative technologies. It seems that Europe is now preparing appropriate countermeasures, but meanwhile we had to witness the attempt at assisted suicide by diesel, which we celebrated in Europe by crediting the old wives’ tale of exhaust issues, when recorded data show unmistakably that a decrease in the sale of vehicles with diesel engines is matched by a parallel percentage increase in environmental pollution and that a new generation diesel engine car, after 100,000 km pollutes less than an electric car. A return to sensibility is possible, but n the meantime the consequences have been felt, the deceleration of the automotive industry in Germany is certainly not just a consequence of Dieselgate, but the doubts and dismay of consumers had their clout.

Regarding Italy, what type of situation do you foresee?
As an individual, I have my ideas and some experience, I can see decision makers with many uncertainties and a lot of dialectics, I am convinced, based on common sense, that deficit and debt should be reduced not because that is what Europe requests or imposes (and now we no longer have Mr Draghi in Frankfurt), but because it is a primary interest for us and our future. At any rate, if deficit were enough to ensure growth, we should be at the top of all ranking lists, considering our world-record public debt, however the result is that unfortunately we are the last country in Europe when it comes to forecast growth rate, we are a country that during the past twenty years grew on average by only 0.2% per year, with a percentage of employed persons lower than almost all of the rest of Europe. I can therefore see many shadows, however, paradoxically, I take pride in thinking that in spite of all of this in Italy there is an industrial system which still manages to thrive, and so the desire to resume my daily battle as an entrepreneur comes back, so I would like to underline first of all that we repeated on countless occasions the need for a complete reintroduction of our Industry 4.0 Plan, I find it baffling and absurd that a functioning law should be abolished just because it was introduced by the previous government. Unfortunately it is a fact that the drop of our investments is once more dragging us down towards a recession. Some significant data: from the second half of 2016 to the first half of 2018 we recorded a strong acceleration in investments in machinery, equipment, plants, intellectual property, with growth rates included between 6 and 9%; from the second half of 2018, following the reduction of the Industry 4.0 plan the trend of investments became -0.4%, and only 0.4% in the first half of 2019.
I not only consider mandatory a complete confirmation of the current law, but we should go further and look ahead, we need a serious multi-annual policy providing structural support to research and development, without which it is impossible to grow within value chains and to improve in terms of productivity and competitiveness. It is necessary to make a bold move to begin again at full speed the industrial projects neglected by Italy within the European Union, first and foremost, the automotive sector, and the current relocation of important Asian investments. It is depressing to realize that in France and Germany efforts are being made to establish plants and productions in the decisive industry of hybrid and full electric power trains, while in Italy, homeland of Ferrari, Maserati and Alfa Romeo, there is a total lack of initiatives, strategies and perspectives.

To make things worse, we also have the great problem of Ilva, a giant with clay foundations, a complicated case with an enormous industrial,
social and political relevance.
Ilva’s sad story is a concentration of mistakes and it confirms the trend of underestimating the effects that some political decisions have on the real economy. In this case the fact was neglected, that sustainability is a complex and harmonic concept, linked to environmental, social and economic factors. We were not capable of keeping all elements involved under control, so now we are faced with a difficult, perhaps impossible, choice, which came about amidst the total lack of interest of those who should have been in control.
It is clear that the production of steel in an industrial country such as ours is very important, the Taranto plant also has an extraordinary relevance for local and national economy and employment, with 10 thousand persons employed completed by enterprises and workers in the supply chain who bring the total to 25,000 employees. To say nothing of the fact that closing down the plant would imply losing a huge heritage of applied technology and almost one point of GNP. It will not be easy, but the priority of solutions which safeguard the environment will have to proceed in parallel with the conservation of one of the essential assets for our country’s manufacturing industry. The Ilva case is a test for our industrial and political system, common sense and practicality should be recovered, shunning simplifications, competence and decision-making capabilities should be brushed up again, without proceeding by trials and errors and defining clear objectives which must be reached in the general interest.

Could you conclude with some positive signals?
It is not easy; unfortunately in a world which requires more and more dynamism, entrepreneurship and creativity, Italy seems to be paralyzed, incapable of taking up concrete initiatives. But every one of us should do their best, as an entrepreneur and citizen I do my part, I say no to this creeping laxity made up of lack of decisions and passing the buck, with someone else being always to blame, a path which will lead us straight into an abyss. I say yes, on the other hand, to our factories, to our cooperators, to that part of Italy which defends jobs and looks at future generations’ employment, and to the healthy entrepreneurship which is still alive and well in our country and continues considering enterprises as great instruments to guarantee opportunities and well-being to the community.