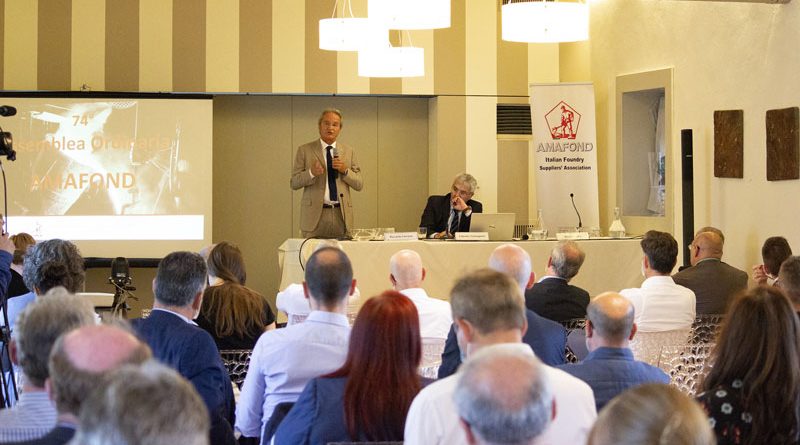 The 74th Ordinary Assembly of Amafond, the Italian Association of Foundry Suppliers, elected the General Manager of the Idra Group, who takes over from Maurizio Sala, as Chairman. This mandate will focus on innovation, with an emphasis on Made in Italy and a strong team spirit in the Board of Directors to give maximum support to its associates at this critical time for the foundry sector.

The 74th Ordinary Assembly of Amafond, the Italian Association of Foundry Suppliers, was held on July 23rd in the setting of Borgo Santa Giulia in Corte Franca (near Brescia). Elections for the renewal of corporate offices for the two-year period 2020-2021 were scheduled and numerous representatives of the member companies took part in the meeting, who followed the proceedings of the meeting in compliance with the precautions and rules of personal distancing against Covid-19. Riccardo Ferrario, General Manager of the Idra Group based in Travagliato (near Brescia) since 2009, was appointed Chairman of the Association. The company has over 70 years of experience in the production of die-casting machines and auxiliary equipment, while Ferrario previously worked for Fiat Teksid, Meridian Technologies and Euralcom. The assembly also elected by acclamation Past President Piero Starita as Honorary Chairman of Amafond.

The newly elected Riccardo Ferrario, after thanking all the companies present, the Board of Directors and in particular his predecessor Maurizio Sala for his time and commitment to the Association in recent years, focused his first speech on the guidelines that will characterize his mandate: Made in Italy, Innovation, Team Spirit. Italy is known all over the world, for instance because of its luxury sector, but still too little for its excellence in the smelting industry. The President’s aim will be to make the companies known as much as possible by putting Amafond at their complete service.
Another key theme is innovation: “Only by having the courage to think out of the box will it be possible to continue to be present and competitive on both international and national markets, even though scenarios have drastically changed and will no longer be the same as before. In Amafond, too, it will be necessary to have the ability to be innovative: in marketing, making the most of the new promotional channels of the web world, but also by increasing relations with the Foundry Associations, Assofond first and foremost, but also with the international Foundry Associations, which are our counterpart and Amafond’s clients. Innovation also involves relationships with universities, which must be useful to remove the old and obsolete tarnish which the foundry world carries with it and which does not attract talent. But above all, we must also be innovative on the subject of environmental sustainability”. The last fundamental point expressed by President Ferrario is the team concept. In order to provide a useful and effective service to all Associates, it is important for each member of the Board of Directors to have a specific role based on what are the most connected sectors. But although the moment is particularly difficult, the President looks to the future with optimism.

The pandemic has confirmed the weaknesses of the Italian System

Every year, the Amafond Assembly is an interesting opportunity to take stock of the state of health of the aluminium sector, thanks to the special vantage point for suppliers of the machinery and materials needed for upstream and downstream production of light metal. The debate that characterized the public assembly this year was naturally very focused on the effects and possible future scenarios following the Covid-19 emergency. This was underlined by the outgoing President Maurizio Sala in his speech, stressing the difficult moment we are living in: a strong recession which had already appeared before the virus because of the fetters on world trade and our exports due to protectionist wars, but also because of the lack of public and private investment and structural reforms. Now politics is being called upon to make rapid and long-term choices, Maurizio Sala underlined: “Overall, Italy will have a huge amount at its disposal and now is the time to make brave choices. The essential priorities – I would say ‘transversal’ to the measures to be launched – are three, already outlined by the President of Confindustria Bonomi in the General Assembly and strongly reaffirmed. The first is productivity: conspicuously absent from the Italian public debate for 25 years, 25 years of substantial stagnation, which discourages companies’ growth in size, their greater equity strength, their rise in international supply chains and their margins to be allocated to investments. Without profits there can be no investments.

The second transversal priority is to measure the quality and effectiveness of public spending. We cannot think that we will solve the problem we have been struggling with for years simply by ignoring it and that to solve it, all we need is more spending, higher deficit and more debt. This is a mistake, it would be an illusion and at this point a very dangerous one: because the suspension of the EU stability pact will not last forever, and because such an amount of resources will be available not only if we present a serious and credible plan as Italy, but also through the results which will be there to testify to our work. The third priority must be to guarantee our future and the future of our children. We immediately need a credible long-term framework for the sustainability of Italian public finance and the reduction of public debt. The public debt will rise this year and at the beginning of next year to around 160% of GDP”. This is why we need a real memorandum of understanding between Italy and the EU for at least ten years, in which to define a reasonable path of debt reduction, to better justify European support for the huge investments that Italy will be required to make for years. This implies reforms to rebalance the perimeter and efficiency of public spending, redirecting social spending towards the poor, young people and families, addressing social and geographical gaps in income and labour market participation. “The Government should soon state how it intends to operate on the tax lever and the tax wedge”, concluded Mr Sala, “if we can count on specific measures such as those put in place by other major European countries in the automotive, steel and export sectors”.

During the public part of the Assembly there was also a round table with Roberto Vavassori, President of CLEPA (European Association of Automotive Suppliers), and Roberto Ariotti (President of Assofond). The two speakers gave rise to an interesting debate moderated by President Riccardo Ferrario, focusing on the prospects for a relaunch in 2021 following the difficult moment we are experiencing generated by the outbreak of the pandemic.
In particular, the Chairman of Assofond Roberto Ariotti focused on an interesting analysis of the present and future of the Italian and European metal foundry sector, while the Chairman of Clepa Roberto Vavassori focused on the automotive sector. The speeches were followed by an interesting debate between the audience and the speakers.