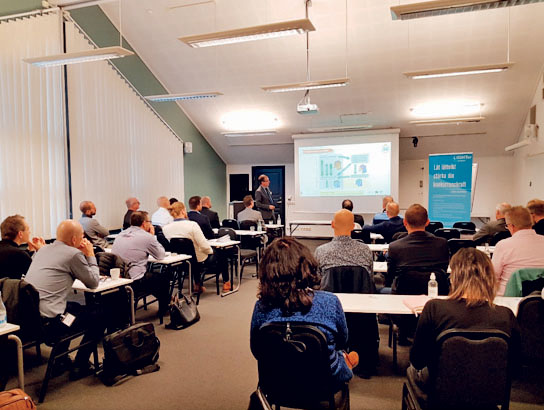 Traditionally, High Pressure Die Casting days were arranged in December 2018 at Isaberg Mountain Resort in Sweden. The conference had the theme “State of the art HPDC” and attracted a little over 40 participants, which was a new record. This shows that HPDC-foundries appreciate the opportunity to get information about new technology and have a yearly meeting where they can exchange experiences and establish contacts with colleagues in the industry.
On the theme of new technology, a handful of presentations were given in several different areas. Lethiguel showed how their equipment can improve the internal cooling of die casting tools and thus increase both productivity and the quality of the castings. Company FRECH showed its new concept for production of disposable cores in salt for die casting, which gives new opportunities for serial production of components with complex geometries. The HPDC foundry Comptech described how they have developed the Rheocasting process and how they now market this technology on license to other foundries. RC can most easily be described as casting with a semisolid melt, which results in components with an extremely low level of internal porosity, which is very important for components used for example in air-conditioning systems.
Then Franco Bonollo (Department of Management and Engineering – DTG, University of Padova and Chairman of the international “High Tech Die Casting” congress) presented results from the research that was carried out within the MUSIC project. The results show how different process parameters can vary and thus affect the quality of the castings, which gave the audience an insight into the importance of process stability and the need for monitoring the process. Then, Dynamate presented how systematic and preventive maintenance can contribute to a stable and uninterrupted production and how this affects the OEE-value and thus also the profitability of the company.
Swerea SWECAST, the Swedish foundry branch’s institute for research and development in casting industry, showed the activities that were conducted with the aim of supporting the industry’s long-term competence supply, a challenge that the Swedish HPDC-foundries share with other industries as well as with foundry colleagues in the rest of Europe.
The conference ended with an account of the activities planned for 2019, including a couple of new education activities, a study trip to Italy this fall and of course the HPDC days in December 2019.