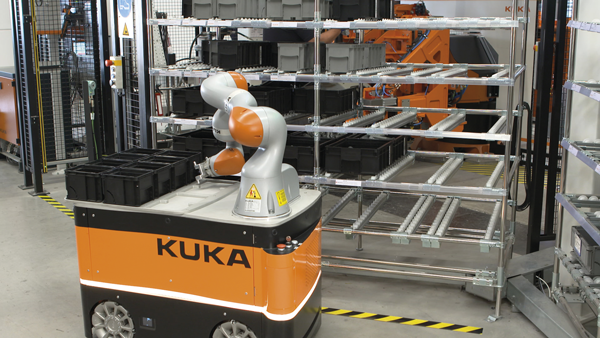 Human-robot collaboration (HRC) alone is not sufficient to make production more flexible in the long term. In the near future, it must be possible for robots to be used in mobile applications. Mounted on mobile platforms, they move independently through production shops and transport goods or workpieces, thereby modernizing logistic processes in the production of tomorrow. Now, KUKA Roboter GmbH too is benefiting from this at its headquarters in Augsburg. With the development, production and sale of industrial robots, controllers and software, the company is one of the global market leaders. The company’s own robot production facility has now switched from a multiple-line system to single-line manufacturing in accordance with cutting-edge lean production methods. The KMR iiwa mobile robot (KMR stands for “KUKA Mobile Robotics, iiwa for “intelligent industrial work assistant”) is an autonomously navigating platform combined with a KUKA LBR iiwa lightweight robot. Here, it automatically supplies production material to the KR QUANTEC in-line wrist assembly station.

Reaching a capacity of over 20,000 robots per year
“We want to gear our manufacturing operations towards the future and, at the same time, considerably boost our efficiency. Our objective is to reach a capacity of over 20,000 robots per year in Augsburg. We can achieve our aim only if we restructure our robot assembly processes in accordance with the latest lean manufacturing methods”, explains Andreas Ostermann von Roth, Executive Vice President of Operations at KUKA Robotics, as to why the approximately 140-meter production line was built with a greater degree of automation. The “just-in-sequence” (JIS) delivery of the assembly material is an important component here. KUKA has developed a full range of solutions for this purpose – from manually relocatable lightweight robots to systems that run fully autonomously. New applications are already possible, particularly in logistics, and there specifically in warehousing. This allows both materials and robots to always be deployed exactly where they are needed most.

The robot automatically delivers bolts, nuts and more
KUKA uses the KMR iiwa in its own production. A KANBAN solution is being implemented in assembly of the KUKA KR QUANTEC. Here, the KMR iiwa takes over the distribution of screws, bolts, sealing rings, nuts and other small parts. WÜRTH delivers the ordered KANBAN boxes to the central warehouse rack. At regular intervals, the KMR iiwa uses its sensitive capabilities to check the individual shelves and remove the delivered boxes filled with small parts. The lightweight robot holds the box up to a QR code scanner mounted on the platform, enabling it to identify the individual target position of each box. The autonomously navigating platform then transports the containers through the production shop and automatically delivers them to the workstation.
“This just-in-sequence delivery is part of our new logistics concept in our robot production”, explains Sebastian Bodenmüller, Head of Robot Assembly at KUKA Roboter GmbH. Two key aspects ensure maximum cost-effectiveness: the KMR iiwa does not travel any unnecessary distances and it works tirelessly without a break.

Safe and autonomous navigation through the production facility
The integrated KUKA.NavigationSolution, combined with safety laser scanners, enables the KMR iiwa to detect obstacles in its path early on and thus to safely and autonomously navigate through the production facility. An essential characteristic of the KMR iiwa is thus its ability to share common paths with people and logistics trains. No special safeguarding or additional modification of the routes is necessary.
“KUKA stands for innovation. This is now also evident in our own production. Our human colleagues have quickly accepted the KMR iiwa as a full-fledged co-worker. They appreciate the advantages of this intelligent and mobile assistant”, says Sebastian Bodenmüller, summing up the robotic colleague’s first weeks of action. The robot predominantly takes on tasks that are monotonous and ergonomically very difficult for humans. It does not require a break and is always ready for operation when required. Insofar as logistics tasks are concerned, the potential fields of application for the KMR iiwa are nowhere near exhausted. The tending of various industrial machines is just as conceivable as direct collaboration with one or more human colleagues in a divided or shared workspace.

Location-independent and highly flexible production assistant
With the KMR iiwa, KUKA is combining the strengths of the sensitive LBR iiwa lightweight robot with a mobile and autonomous platform. In Hall 7 at the KUKA headquarters in Augsburg, the robot has now become a location-independent, highly flexible production assistant with an unrestricted workspace – an ideal basis for meeting the requirements of Industry 4.0.
Flexibility is the basic prerequisite for the versatile and adaptive production of tomorrow. Thanks to its specially developed Mecanum wheels, the platform of the KMR iiwa can move in any direction from a standing start. The robot and vehicle are operated with the KUKA Sunrise controller, which is capable of handling multiple kinematic systems, thereby considerably simplifying operator control and use in practical applications. Additional environment scanners on the vehicle allow obstacles to be detected. The Li-ion batteries used supply the vehicle and robot directly with power.
The SLAM navigation software developed by KUKA enables the KMR iiwa to move safely, fully autonomously and without cable connections. The system is of modular design and can be expanded with additional hardware as required by the individual application.

Investments in automation as the key of success
By increasing the degree of automation in its own production, KUKA is setting the course for the future.
“While Industry 4.0 is still being discussed in many places, we have already begun living it in our production facility. Investments in automation such as with the KMR iiwa in screw logistics applications ensure our long-term success”, says Andreas Ostermann von Roth, describing the motivation for using the mobile robot. “In the future, we will be able to react more quickly to customer and market requirements much more flexibly”, he predicts.