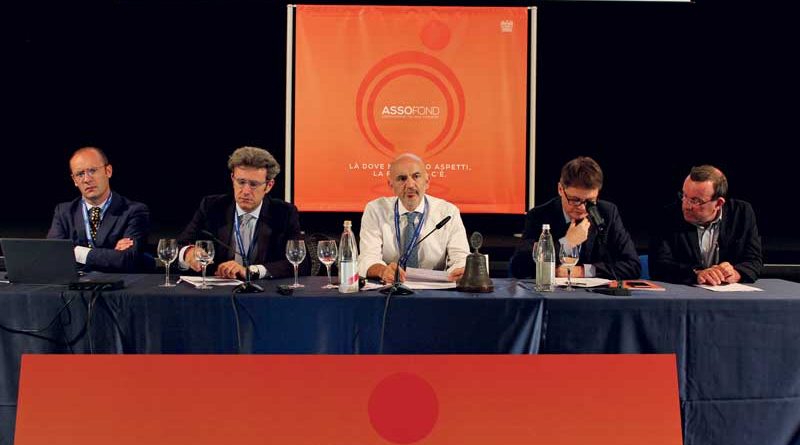 Assofond’s 70th General Assembly confirms the industry’s upswing. In 2017 the production of castings in Italy reached 2.3 million tons and revenues grew by 8.6% reaching 7 billion euro.
An evolution under the aegis of circular economy, as the First Sustainability Report of the Italian foundry industry confirms

With about 200 participants and more than 50 foundries represented by over 80 entrepreneurs, managers and employees, the 2018 edition of the Assofond assembly recorded a sizeable attendance both by the associated companies and by the public. The event, which was held in IVECO’s historical factory in Brescia, was entirely dedicated to a theme which is increasingly decisive for all segments of this and other industries: sustainability. During the public part of the assembly, with the significant title “Foundries and the automotive industry: the sustainability challenge”, this theme was tackled by the speakers present from two different standpoints: on the one hand, the evolution of the Italian foundry industry as regards environmental, but also economic and social sustainability was analysed, on the other hand , an attempt was made to analyse the segment’s outlook given the ongoing “sustainable revolution” which we are witnessing in one of the most important sector among foundries’ clients, the automotive industry, which for years has been seeking viable alternatives to fossil fuels. The sustainable evolution of foundries was illustrated, besides by Assofond’s president Roberto Ariotti, by professor Stefano Pogutz from the Management and Technology department of Milan’s Bocconi university, who moderated the meeting and introduced to the public the first sustainability report of the Italian foundry industry. The changes in the automotive industry and the possible consequences for foundries were outlined by Anfia’s Director, Gianmarco Giorda, by professor Carlo Mapelli of the Milan Polytechnic’s mechanical department and by Jesus Chavida di IVECO.

A growth driven by exports
In his speech, President Ariotti illustrated the figures of the Italian foundry industry. The production of ferrous castings in 2017 added up to 1.23 million tons, with a 7.2% increase. This should be added to over 1 million ton non-ferrous castings, 7% more with respect to 2016. Production increases were also felt on the revenues front with an overall value of 7 billion euro, an 8.6% increase with respect to 2016. Regarding the current year, the industry’s production dynamics confirm a positive trend even for the first few months of 2018. The President also remarked that Italian foundries are a important of European manufacturing, whose overall value reaches 40 billion euro. In Europe the Italian foundry industry immediately follows Germany, while on the global scenario it is confirmed tenth on the ranking list. Global production of castings settled down at around 105 million tons, 71% being produced in Asia, 15% in Europe and 13% in America. While Africa only reaches 1%. In spite of China’s rapid rise and of its first placing on the global ranking list with 47.2 million tons and a share of more than 45%, European foundries still play an important role on the international scenario: with 15.4 million tons, they represent 15% of the world’s output. After the two recessive phases which characterised the European economy between 2008 and 2013, the upswing which followed was characterised by different growth rates among the main European competitors. Italy and Germany shared similar growth rates, better for Italy during the past year (+7% as opposed to German foundries’ +5%). In France the increase rate was weaker; in Turkey, as from 2013, the phase of acceleration was such as to determine a growth rate of +67% with respect to 2010. The Italian foundry industry is the first in terms of growth rate especially thanks to exports, which by now account for a 64% share of revenues.
The drop in Italian exports globally in the 2008-2009 period was the largest in EU28, as from 2010-2011 foreign sales recorded a growth with rates similar to Germany’s and well above France’s, although considerably lower than Spain’s. During the almost ten years of crisis, Italian exports of foundry castings showed a performance which was considerably higher than the average for the manufacturing industries, with an increase, in terms of volumes, greater than 30%. Foundries therefore showed an excellent capability of transferring their sales to foreign markets. Roberto Ariotti mentioned that “Our products are high added value items, not commodities. The fact that we are competing against Germans and Scandinavians is a clear sign of the very high innovation rate of our products: we export know-how, more than anything else, and a technology which is envied by the whole world. I would like to point out”, he then declared with determination, “that these results also derive from the fact that we worked in an area with a strong and stable currency such as the euro. The euro supported us and allows us to have a cost of money and of investments capable of guaranteeing a significant competitiveness. Any talk of abandoning this currency risks creating devastating consequences for the entire industrial system in Italy”.
Ariotti concluded his speech relaunching the theme of sustainability, the focus of the entire day of works, introducing the results of the sustainability report drawn up by Assofond: “We did not decide to focus on sustainability because it is a fashionable topic. Ever since I joined the company several years ago, references to recycling were always evaluated in our activity’s cost-benefit analyses. This is why we decide to put on paper, in this sustainability report, aspects which have always been part of our working methods. We just decided to communicate it better, in order to enable all stakeholders to understand how the Italian industry can provide environmental performances which are even superior to those of our northern European competitors. The Italian foundry system is based mainly on family-run businesses. For this reason even when it comes to sustainability we always tried to leave our children with a company capable of being increasingly compatible with the surrounding environment. A virtuous circle which we would like to keep up in the future too”.

Foundries at the centre of circular economy
The first sustainability report of the Italian foundry industry was presented in detail by Professor Stefano Pogutz, who illustrated the work completed by Assofond: a complete analysis of the Italian foundry industry, which provided significant indications as to the investments which the industry’s companies carried out during the past few years to guarantee the sustainability of their activities. The report firstly highlights how the industry may be considered in all respects a key sector for the transition to a circular type of economic system, thanks to its capability of recovering and recycling scrap to create new products. This allows not just to reduce the use of landfills to get rid of scraps, but also to avoid C02 emissions linked to the mining, production and transportation of raw materials. Besides, the report provides interesting and insightful figures as to how far foundries have gone and are going to improve constantly the sustainability of their production activities, such as the datum relative to investments in environmental domains: in 2015 foundries destined 28.5% of all their investments to activities aimed at reducing their environmental impact, considerably more than the percentage value recorded by the manufacturing industry on the whole (2%) and even by the metallurgical sector (4.1%). It is by means of this commitment that foundries, in recent years, were able to develop technologies capable of increasing the use of recovered scrap as raw material for all type of foundry furnaces, reducing drastically the emission of dust in the atmosphere (-65% as from 2003) and the production of waste per ton of castings manufactured (-26.6% from 2000 to 2015), reusing almost all of the exhaust sands produced and water used to cool down the production plants. But Italian foundries do not only pay attention to the environment: even the other two dimensions of sustainability, the economic and social ones, are tackled in detail in this report, which returns the image of an industry made up mainly of family-run SMEs, financially stable and capable of financing themselves, paying attention to human resources and job creation and developing opportunities for the territory and communities where the companies operate.

Sustainable mobility: what changesfor foundries?
What role will foundries play in the automotive industry of the future? Which scenarios are possible for this segment faced with the revolution of sustainable mobility? How do the demands of automotive clients evolve? These themes were the focus of the other speeches of the day: Anfia’s Director, Gianmarco Giorda, Professor Carlo Mapelli, tenured professor of metallurgy at Milan’s Polytechnic, and Jesus Chavida, Iveco, highlighted the various aspects of this transition towards zero-emission mobility. “The automotive industry provided a significant contribution towards the end of the crisis”, Anfia’s Director remarked. “Suffice it to say that in the world the output of cars in 17 years went from 56 to 98 million vehicles per year, especially thanks to the growing consumption in India and China; these countries will drive purchases in the future too, considering that Europe will only account for 11% of consumption”. The future will also be influenced by a significant change in the fuel trend. “As Anfia we estimate that alternative fuels, which currently concern about 7% of new vehicles, will double their market share in four years, with diesel cars which will lose about 1.5 million units, replaced even by petrol-powered cars”.
This drop in diesel cars has already shown up as a 10% decrease in new car registrations in May, even though Giorda stated that the decrease in diesel car registrations will not help in cutting down C02 emissions: the efficiency of an Euro 6 diesel engine is in this respect better than a petrol-powered engine. Regarding the transition towards a greener car, Giorda highlighted that European norms are becoming increasingly stringent, but what would be necessary is a plan for a more gradual transition towards cars with alternative fuels, with respect to the current state of deregulation.
“To cut down on C02 emission by cars it is necessary to reduce their weight”: with this simple equation Carlo Mapelli, professor of the Mechanics Department of Milan’ Polytechnic, summarised the course of action which all car makers are taking to respect the new limits in emissions which will be in force in Europe as from 2020. If the world of metals used for chassis and car bodies has already moved in this direction with new types of steel, the cast iron world should do the same: the use of castings will change considerably with the arrival of electric cars. So long as there will be hybrid cars, the foundry industry should not be particularly penalised by the new models, actually its volumes could increase, because even the components of electric cars include both cast iron and non-ferrous metal castings. The basic message however remains that even the foundry industry in order to keep up the current uses or to find new ones will have to be ready to invest in the near future.
Jesus Chavida, IVECO, provided the experience of the industry and explained the reasons behind the company’s choice to use methane gas as fuel for heavy vehicles. Natural gas, in its compressed or liquid form (LNG), in IVECO’s vision is the only technologically mature solution at competitive costs which is immediately available: for this reason the company during the past few years decided to concentrate on this technology, increasing gradually the conversion to methane of all the vehicle ranges and finally, in 2016, introducing the first road tractor for long distances. This choice led IVECO to become at present the commercial vehicle manufacturer with the widest range of gas-powered vehicles.