For the global aluminium market, the key issue today is energy, which looms over the whole system and makes it clear that the days of easy and simple energy are definitely over. An issue which certainly touches all aspects of our daily lives. When we think of the light metal value chain, it is particularly affected by two important factors. The first is the role and behaviour of China, which in just a few years has become a leader in the production and use of aluminium: in 2020 it produced just over 37 million tons of primary metal out of 67 million worldwide, it uses a great deal of it, and it was among the first countries to restart after the Covid-19 pandemic, when the rest of the world was still gearing up for recovery. And in its recovery, China is engaging in a change involving its oldest, most inefficient and most polluting smelters, planning to transform them into competitive and environmentally sustainable plants, in line with the green approach of the industry supported by the European Commission. Chinese President Xi Jinping himself recently declared that China will no longer build coal-fuelled power stations, and that the ultimate goal is to achieve carbon neutrality by 2060. Basically, the resulting energy cuts come about as China pursues its goals to fight climate change.

With the global economy recovering from the pandemic, the strong upswing in the Chinese market has driven consumption of raw materials and metals; aluminium prices are therefore also under severe pressure today as the physical availability of the metal decreases. The decision to cut Chinese primary production is estimated at just under 3 million tons/year; with this figure China becomes a net importer of raw aluminium, and some analysts estimate a global primary deficit this year at around 1 million tons. All this has led to a sharp rise in stock market prices to an all-time high since 1980. Besides, world stocks of metal, both physical and financial, have shifted from Europe and the United States to Asia, where subsequent shipment to China is cheaper, and all of this has deeply altered the flow of supplies. Then there are the problems linked to logistics, which have made procurement more difficult: demand for shipping has increased, there has been a shortage of containers and the consequences have been slowdowns, longer delivery times and costs which have trebled. Just a few weeks ago, for instance, aluminium billet premiums in Germany and Italy reached new record highs, more than 1500 dollars per ton, to give an idea.

And since we are dealing with China, we are talking about big numbers: it will probably take quite some time for this deficit situation to sort itself out, and all this means first of all tensions on the front of the global raw metal system. There is no doubt that countries traditionally lacking in primary metal, such as the European Union, already heavily burdened by the collapse of electrolytic metal production in recent decades, will face supply difficulties which will become even sharper in the coming years, despite the desirable developments in virtuous secondary production, which at best will only be able to mitigate the shortage of raw metal to a small extent. All the more so since, as we have been repeating for decades, the EU imposes an incomprehensible import duty on raw aluminium, an obstacle which acts as a natural disincentive to the flow of primary aluminium from world producers to Europe. This is a complex issue which, given the deliberate negligence of decision-makers, has been holding back the development of the entire aluminium downstream sector in Europe for too long. 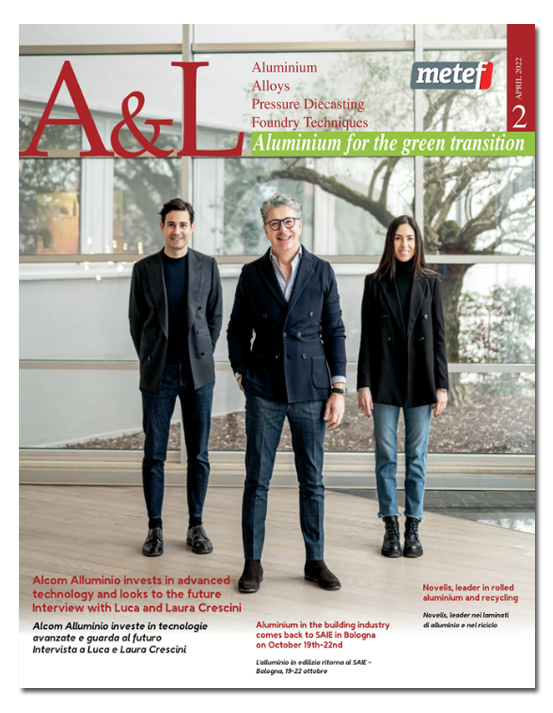