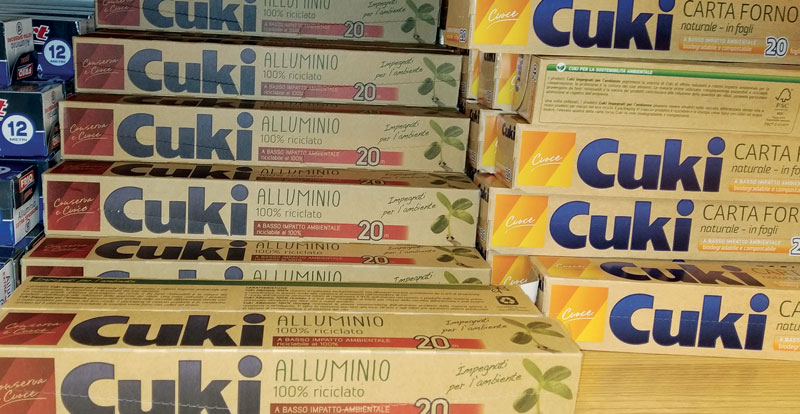 The appearance on mass markets of Cuki 100% Recycled Aluminium, launched by the Italian market leader in the aluminium kitchen foil segment, confirms the spread of a new ecological sensitivity even among Italian consumers

Some of the main global manufacturers of aluminium foil rolls for kitchen use recently launched on the market, as a new product, aluminium kitchen foil rolls marked “100% recycled metal”, strongly highlighting this percentage on the product’s packaging. It is declared that the foil was manufactured exclusively by recycling aluminium from production scraps. Even this choice fits into the general research of non-traditional methods of creating a circular economy and increasing the reduction of carbon dioxide emissions in the atmosphere.
The use of “recycled” aluminium for kitchen foil, or better still, the explicit and underlined declaration that remelted metal was being used, has a long history. At the end of the Eighties, one of the leading Italian manufacturers of household products considered the possibility of writing in large type of the packaging of kitchen foil rolls the percentage of recycled metal. Of course a first test was carried out to verify what the general public’s reaction would have been. Even at the time this datum, which may be linked to the infinite recyclability of aluminium and the ensuing energy savings, was considered one of the light metal’s assets by trade operators, but not by the majority of consumers, who turned out not to agree at all. The wording referred to recycling was linked to such terms as scrap or wreck, at the time considered something dirty or which cannot be controlled and there for not compatible with the kitchen environment where the foil was normally used. The result of the survey was so clear as to lead to the elimination of terms connected to recycling even on other foil-based products, such as containers, boxes and lids.
The anecdote reported above is an indication of the great ongoing change in the sensitivity of consumers regarding environmental issues. Currently scrap and waste may be listed among the raw materials used in a positive production method. Unlike what happened in the past, everything which is recycled is today considered a positive factor which contributes to solving the environment’s problems.

A new environmental sensitivity
A few decades have gone by since the surveys mentioned above and now leading companies in the industry, as we said, chose to enhance aluminium’s potential in safeguarding the environment by launching on the market products which declare that their origin is 100% recycled aluminium. Among these manufacturers some stand out, such as Reynolds in the United States with its 10% recycled Reynolds Wrap.
Whoever knows even superficially the household segment is aware of the fact that Reynolds Wrap is an icon, as shown by the fact that it is one of the most well-known and appreciated brands in the USA. Launched on the American market more than 70 years ago, Reynolds Wrap was the first aluminium foil used in the kitchen and over the years it was imitated a very large number of times. Currently kitchen foil adds up to roughly one fourth of the global annual production of thin sheet metal, which is approximately equal to four million tons. For quite some time now, foil which is openly described as completely recycled has been available on the North American market, developed by companies specialized in products with a very low environmental impact.
In Italy, Cuki-Domopak, national leader in the household segment, developed a product which is openly completely made out of recycled metal. Evidently, even in our country a greater ecological awareness is finally becoming widespread among citizens-consumers and this leads to the hope that even other companies may follow this new trend.
Cuki’s 100% recycled aluminium is made exclusively out of aluminium from production scraps and thereby contributed to reducing CO2 emissions in the atmosphere. It is well known that recycling aluminium allows to save 95% of the energy needed to produce it from primary aluminium. A litre of fossil fuel provides the energy needed for the production of three 200g foil rolls from primary metal and 60 identical rolls from recycled metal. 100% recycled foil may in turn be completely recycled and may be used again endlessly to give life to new products if positively included in the waste sorting circuit.
In all the cases examined, the roll’s packaging uses products with low environmental impact such as recycled cardboard for the pack printed with water-based inks and the internal cardboard core is obtained from waste paper.