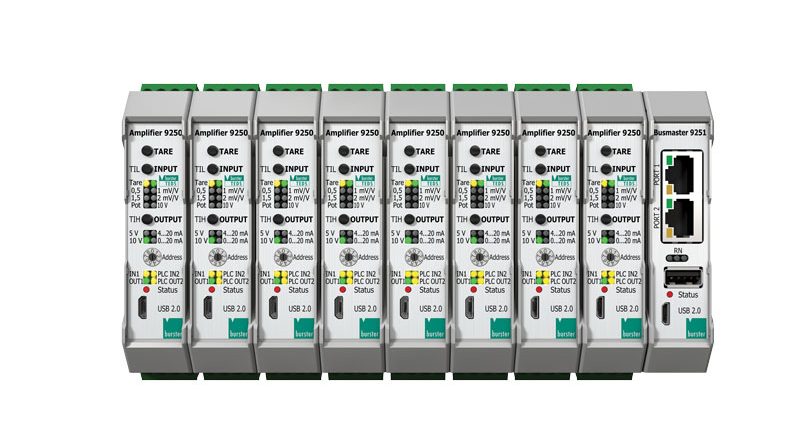 The burster’s latest generation of amplifiers with the 9250/9251 instrumentation amp system unites all the features that make modern measurement data acquisition possible. The system is suitable for measuring force, pressure, displacement, rotational speed and torque

The latest generation of instrumentation amplifiers from burster is rising to new challenges with the 9250/9251 instrumentation amp system, delivering high performance and fieldbus compatibility in a modular, versatile design. The future world of automation indeed presents users with challenges such as networking, speed, accuracy, integration and cost effectiveness. Proof that “the whole is greater than the sum of its parts”, the new instrumentation amplifier anticipates all the demands of Industry 4.0, both today and tomorrow. Bus-compatible, modular and easy to use, the new 9250/9251 amplifier generation unites all the features that make modern measurement data acquisition actually possible. The combined system of amplifier module and bus-controller is network-compatible, accurate, smart and adaptable to every need, and can be integrated into any existing setup and application.

The system is suitable for measuring even combined measurements
The 9250/9251 instrumentation amp system supports Ethernet-based fieldbuses such as Profinet, Ethercat, Ethernet or I/O interfaces and processes signals from strain-gauge sensors, potentiometers and incremental sensors of whatever make, as well as analog ±10 V process signals. The system is suitable for measuring force, pressure, displacement, rotational speed and torque, including combined measurements. When burster sensors are used, transferring sensor data is not only far simpler but also resilient to user errors thanks to burster TEDS. The single-channel 9250 instrumentation amp is designed to work autonomously and independently or in combination with the 9251 bus controller to form the multichannel version, offering up to eight measurement channels that can be read synchronously via the bus controller.

The main technical features
Thanks to its high level of accuracy and its tare facility, the 9250 instrumentation amplifier can tackle the most demanding measurement tasks. Ultra-simple configuration is possible in a matter of seconds with the two-button configuration feature for standard output parameters. Additional settings can be made using the DigiVision PC software via the USB port. Various functions such as the tare function are controllable via the two user-configurable inputs. Two limit signals can be used to define switching points, with switching performed when the limits are reached. Adjustable cut-off frequencies allow the amplifiers to be used in applications requiring filtered output signals for selective output.
The 9251 bus controller provides a versatile interface to the world of automation via all popular fieldbus systems, so that measurement data can be analysed exactly where it’s needed. The bus controller simply slots in beside the bus-compatible measurement modules. Thanks to their slim-fit housing design, the modules take up little space in the control cabinet.