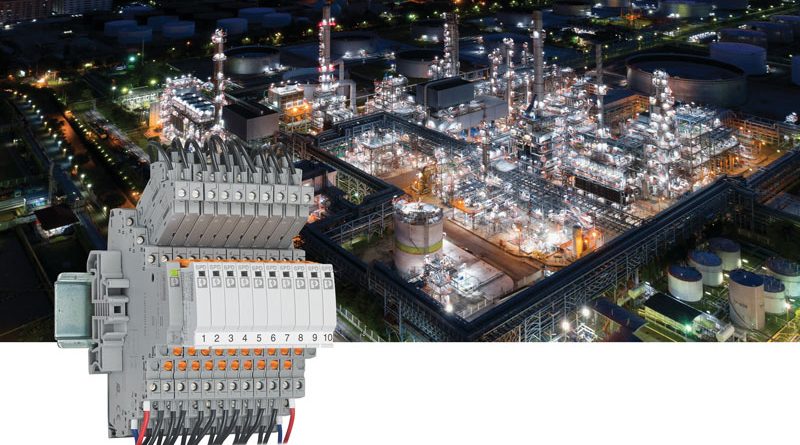 More and more companies demand space-saving components for the cable-connection cabinets of their widely branched measurement and control systems, which can often be found in process technology. With the Termitrab Complete (TTC) product range, Phoenix Contact offers an compact solution for the connection and distribution level, which now also offers a fine fuse function.
On the distribution level of control cabinets in process technology, requirements that actually are contradictory collide. On the one hand, easy access and high maintenance convenience are required. On the other hand, costs are to be cut – by a compact, space-saving design. This space-saving design is also based on the large number of signals in the system.
Phoenix Contact designed the Termitrab complete system to resolve this contradiction.

Many functions in one module
The narrow components are originally surge protection components for signals in the low-voltage range. They are designed as multi-level terminal blocks and offer two connection levels in through wiring. A third connection level can be used for a joint reference line or cable shielding. The components of the Termitrab complete product range also offer two additional, optional functions: knife disconnection and modular design.
The integrated knife disconnection for the two signal wires enables the user to disconnect signals from the field cables during startup or maintenance work. This way, measurements or test on the field side can be implemented easily without having to loosen the cables from their termination points.
Thanks to their two-part design, modular, pluggable protective devices also facilitate replacing overload voltage-limited components. This way, recurrent tests according to IEC 62305-3 can be carried out without affecting the running application. For this, the Termitrab complete plug is plugged into the Checkmaster 2 test device – and the function test is run. The system determines the current technical parameters in detail and compares them to the set points taking into account the permissible tolerance. Each single test is saved. The data of all tests can then be exported via a USB port to be processed. This way, test reports are created with low effort.

Overcurrent protection for signal circuits
Fine fuses are used, e.g., for systems in which the signal circuit is connected to a 24 VDC power supply. This can be a connected actuator circuit in which a control valve is addressed. Such a design is also used for a power supply to sensors in the field. Usually, a circuit breaker with correspondingly high current switching capacity is installed directly downstream of the power supply system. In this main trunk, values of 10 A or 20 A are typical. To selectively provide the individual signal circuit branches with overcurrent protection elements, tuned fine fuses can be used. The nominal value of these fuses is correspondingly lower and depends on the operating currents of the field devices. In the event of a short circuit in a field cable, or an error in a device, the fuse in the branch will trip. All other signal circuits connected to the same main trunk remain unaffected by this error.

Additional protection: the rated current must not be exceeded
The fine fuse also offers protection for the surge protective module itself. The rated current identified for the component must not be exceeded. Fine fuses for circuits with less power typically have a nominal current of some 100 mA. For comparison, the rated current of most 24 V components from the Termitrab complete series is 600 mA – which means that it is more than sufficient to cover numerous applications. In addition, the High Current (HC) variants in the Termitrab complete range even permit a current of up to 6 A. This value is also the maximum permissible current for the fuse holder. Therefore, there is also a harmonized and suitable solution for actuator circuits with higher nominal or starting currents.
Termitrab complete offers yet another advantage: the clever design of the fuse holder even enables the user to add a fuse holder to all terminal levels at the Termitrab complete housing, that feature screw-connection technology. This way, several channels that are switched via the complete module can be secured.