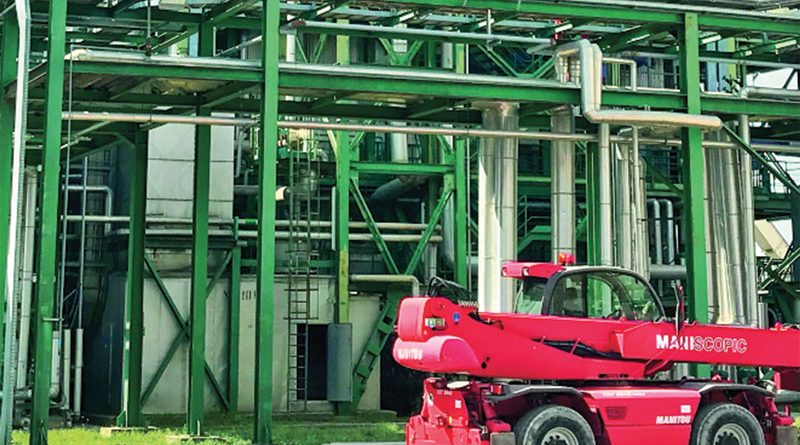 Biomass bunkers can take on huge dimensions. In one such bunker, VEGA sensors measure not only vertically but also horizontally in order to keep track of the entire biomass supply. This measurement setup ensures a reliable supply

In one of the largest biomass plants in northern and central Italy, VEGA sensors were installed to replace the visual estimations performed by the staff who keep watch over the biomass supply. The Bando d’Argenta (FE) biomass power plant is one of the most efficient of its kind, with an installed capacity of around 21 MW and a net electricity generation of 25%.
The biomass plant itself consists of two identical production lines using superheated steam, a steam turbine, a connected electrical generator and several systems for reducing atmospheric emissions.
The biomass used for combustion is of vegetable origin. It consists mainly of waste material from specially cultivated plants and the pruning of forests and poplars.

Consumption estimated via visual inspection
One of the special challenges was the biomass storage facility, which has enormous dimensions and constant movement inside. Heretofore, the staff at San Marco Bioenergie had monitored the stock of biomass by means of visual inspections. It’s possible to do this with open bunkers, if you have some practice. However, the quantity of material consumed and the quantity remaining in stock were always just rough estimates.
Although this method worked for many years, it was unsatisfactory in two respects. First, the capacity of the biomass storage facility could never be fully utilised. In order not to overfill the bunker, the employees preferred to play it safe. And second, the operating personnel wasted a lot of time guessing whether and how long the stocks would last.

Securing replenishment
The biomass is delivered in the form of wood pellets, which are stored in a large bunker measuring 30 x 5 x 8 meters. This immense storage capacity is necessary to be able to react to increased demand during the heating period. Also, the ongoing processes in the power plant must never be allowed to run out of fuel or be otherwise interrupted. Reliable measurement of the silo contents is therefore an absolute necessity for optimum planning of the material logistics.
The operating conditions in the bunker are very rough due to dirt and dust. And there is constant movement and changing surface topology, as the material is often pushed inwards by tractors and crawler vehicles.The VEGA team suggested using a VEGAPULS 69 radar sensor to continuously monitor the volume of the biomass store. The instrument is completely non-sensitive to dust and temperature fluctuations.
The corrugated sheet metal walls of the bunker are not a problem for the sensor either.
In the end, two sensors were installed for each bunker: one sensor measures the filling level from above (i.e. from the roof), the second one measures the free space in the horizontal plane. This makes it possible to evaluate the material volume with great accuracy. It is important to know that the biomass of wood chips and pellets is transported to the screw conveyor with the help of rakes. San Marco Bioenergie thus wanted to know not only the height of the pellets in the bunker, but also their horizontal position.The correct positioning of the sensors was decisive here. Through intensive discussions between the customer and VEGA, it was possible to find the right location and orientation for the sensors in the huge bunkers.

The storage capacity was increased
Everyone involved intuitively agreed that two VEGAPULS 69 sensors would be necessary to reliably determine the quantity of wood chips and pellets in stock at any given time. To be sure, this was first definitively confirmed after installation and startup.
Today, thanks to VEGA sensors, the power plant has a secure supply of pellets around the clock.
What is more, the storage capacity was increased without having to invest in new bunkers. And the instrumentation has also been totally convincing in daily operation. The operating team was especially pleased that the sensors require no maintenance, and work reliably even when heavily soiled. l