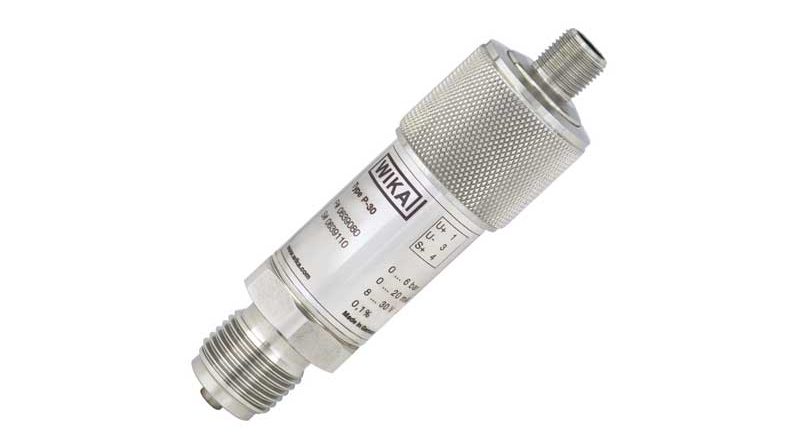 Accurate measured values are required in many applications. In this article Wika presents the basic design of both analogue and digital sensor measuring chains, and also the typical error influences

Whenever accurate measured values are required in an application, the advantages of digital sensors, compared to previously used analogue instruments, become obvious. Here, digital sensor means a sensor with an integrated analogue-to-digital conversion, which uses a digital interface to transmit the measured value (e.g. CANopen, PROFIBUS, USB) with the pressure value transmitted as a numeric value. An analogue sensor, however, has no built-in analogue-to-digital conversion and transmits its signal as an analogue current or voltage signal, e.g. 4-20 mA or 0-10 V.

Avoiding errors and signal conditioning
In applications where high accuracy is required, it is advisable to use digital sensors. Doing this avoids the further sources of error that exist in analogue instruments, over and above the signal conditioning, as a result of the analogue signal transmission. Figure 1 shows the schematic design of a typical analogue pressure sensor. By the deformation of a diaphragm under a pressure load, a resistance change occurs in the resistance bridge fixed to the diaphragm. This change in resistance is converted into an electrical signal, amplified and transformed into a standard signal. The compensation of the sensor-specific errors (zero error, span error, non-linearity) is also made through analogue circuit technology. With digital sensors, however, the electrical signal of the resistance bridge is directly converted into a digital value and the subsequent compensation is instead made mathematically in a microprocessor. Here, depending on the required accuracy, non-linear errors of any order can be compensated and accuracies to 0.05 % can be achieved at low cost. By using a μC, an active temperature compensation can also be made, eliminating any temperature error within a defined temperature range.

The pressure signal is not influenced by external effects
Initially, the analogue front end of both sensor principles is adversely affected by environmental influences such as temperature fluctuations, EMC, etc. However, in the case of the digital pressure transmitter, the pressure signal will no longer be influenced by external effects after the AD conversion. In the case of the analogue signal chain, even the internal compensation is subject to possible temperature effects due to passive components. The output driver that generates the standardised output signal is also constrained by a variety of external influences (cable length, input impedance of the signal evaluation, temperature, EMC, etc.).
For further processing, this analogue signal value must be digitised, if only for visualisation on a display or as a control variable for a controller. For example, I/O channels of programmable logic controllers (PLCs) or external A/D modules are used for this.
These components are also subjected to environmental factors that have a negative impact on the accuracy of the measured value acquisition.

Adapting the numerical value
These A/D evaluation modules also have a specified accuracy, which is the best to which they can determine an analogue signal.
In the case of digital signal transmission, the overall accuracy of the measuring chain is influenced solely by the inaccuracy of the sensor. to any digital BUS signal. Following A/D conversion within the sensor, the pressure is available as a numerical value.
This can be adapted through a microprocessor to any digital BUS signal. This adaptation has no influence on the accuracy specification. For the sake of completeness, it should be mentioned that strong EMC interference may also affect digital BUS signals.
The digital measuring chain design
In the digital measuring chain design, it is not just the susceptibility to error that is reduced, but also the amount of wiring. Many manufacturers now operate on the basis of identical component strategies when configuring digital sensors − the compensated pressure value is then ready to be transformed back to an analogue standard signal through a D/A conversion. In the context of the comparison of analogue and digital sensor technology, this is almost the worst case. After comparing the basic construction of the measuring chains, we should now also look at the advantages using a calculated example of an accuracy assessment. Pressure sensors are available in both digital and analogue versions at reasonable prices with accuracies of up to 0.1 %. This accuracy should be used as a baseline in both cases.

Additional costs have decreased
Digital systems also offer benefits on the cost side. The additional costs for sensors with digital interfaces have decreased in recent years. In the example of the pressure transmitter, there is already a supplier of complete pressure transmitter families where one can choose directly between analogue and digital output signals at no extra charge.
The cables required to transmit digital signals are quite expensive to purchase when compared to their analogue counterpart, though in the case of a BUS system, only one line is required. An analogue signal transmission cable is required per measurement point, so in total, the wiring for the digital system can be more cost-effective.

Conclusions
In summary, digital measuring chains exhibit their strength in applications where there are multiple measuring points and a secure and accurate transmission of measured values is needed. Particularly in the example of engine test benches, that run for considerable periods, 24 hours, 7 days a week, in an environment where elevated temperatures and also strong EMC interference prevail, it is recommended to use a fully digital measuring chain.