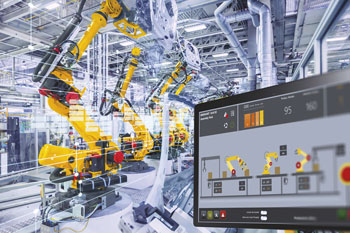 Progea developed a Industry 4.0-oriented project, which allowed to connect several machines of various makes. All strategic data has been collected and stored, with maximum security and the benefits of the cloud solution

An Industry 4.0-oriented project was recently developed by Progea to connect several machines of various makes using the Movicon.NExT server. The machines are part of production lines that intersect and change course according to production needs. The project’s aim is to collect and store all strategic data, starting from the beginning of the production line to the warehouse, in a database.

The resulting reports and charts are tanalyzed by experts
By using the Pro.Lean module, data are managed to quickly obtain the OEE, KPI and Downtime production indexes in addition to a series of reports customized by the customer. The resulting reports and charts are then exported to the management and IT departments where they are analyzed by experts. The management sends production orders and lists of material to the various production lines and islands. The graphics have three display levels to provide detailed information on all the production lines, each production line and each production line machine. The machines are divided by department, so the department manager can log on from a Client to the company network to control and manage the part he or she is in charge of. Some of the company’s priority users can also connect by means of using a web client on their tablet or smartphone. Furthermore, a great amount of data deriving from field sensors and meters are managed and sent to the Cloud using a customized solution. The cloud solution, being a cloud computing service, is provided according to monthly or annual subscription-based pricing model that also permits costs to be contained by allowing the product to be used at a minimum.

Measuring the efficiency rate of the production systems
The manufacturing plant is managed by a SCADA that uses the new Databoom drivers developed by Progea, to send production data, such as temperatures, pressures, energy loads and other data to the Progea Cloud – Databoom. The HTTPS communication protocol is used towards the Databoom API, so that outgoing data traffic is completely encrypted without needing to open an incoming data port in the company’s firewall to ensure an optimum level of security. The company chose to data mine as much information as possible by measuring the energy consumptions not only of the general circuit breakers but also a major part of important production loads as well. By measuring energy consumptions and the capacity of compressors, production system and services simultaneously, it was possible to obtain the KPI in order to measure the efficiency rate of the production systems and keep them under control. The Cloud interface is used to track the behavior of these KPI and set alarms when specific thresholds are exceeded.

Energy consumption data of a new part of the factory
Energy consumption data of a new specific part of the factory are also sent together with the production data. In this way, with the help of specialized energy consultants, it was possible to be eligible and access the Italian White Certificate scheme, an energy efficiency incentive program that is also referred to as Energy Savings Certificate (ESC), Energy Efficiency Credit (EEC). In this regard, the cloud solution has allowed them to share only the energy load needed for their operations with other accounts. The choice of signals to share and the relative display modes is in the hands of the final user and not the system integrator. Practically, it is the user who decides what to share and with whom which can be done in complete autonomy by means of the administrative accounts.

Data aggregation from different sources and other benefits
There are several key benefits gained by using the cloud solution. First of all, data can be aggregated from different sources above all those geographically distributed without changing security rules. The right information can be distributed to the right person using customized displays based on specific business activities. Another benefit is related to the fact that all data archives can be centralized and standardized in one unique cloud storage without ever needing a usb or excel spreedsheets. In addition, there is no need to worry about hardware updating or degrading as the platform is always kept updated by the cloud provider; it is scalable and available without any hardware limits as it is based on a data centers. Finally, it is possible to gradually introduce the cloud technology in your system and continue to expand the structure in a continuous process of improvement.