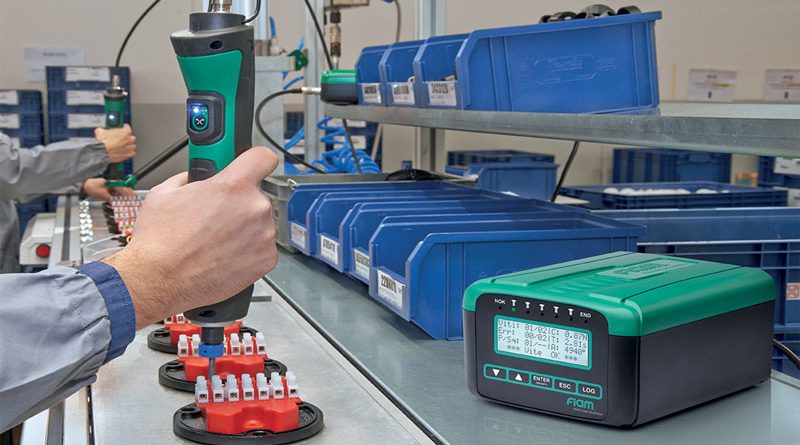 Fiam organized a webinar titled “When a screw tightening system may really be called SMART”, with Nicola Bacchetta, Sales and Marketing Director, as speaker, to discuss the features which an innovative and 4.0 screw tightening system should have. Among the central themes, there is flexibility: clients now ask for highly customized products in small batches, a challenge for manufacturing companies to which Fiam responds with the launch of new systems designed for these needs.

On June 26th Fiam Utensili Pneumatici organized a webinar titled “When a screw tightening system may really be called SMART”, where Nicola Bacchetta, Sales and Marketing Director of Fiam, described what features a screwdriver must have to be considered intelligent and ready for Industry 4.0.
Fiam Utensili Pneumatici since 1949 designs and manufactures pneumatic and electric screwdrivers, automation systems, pneumatic motors and other types of tools for the industry. “We are now one of the very few companies which has been producing in Italy for more than 70 years”, Nicola Bacchetta commented. “In addition, we export practically all over the world, with two sales branches in France and Spain”. Fiam’s reference markets are general industry, MVI, automotive, aerospace, the household appliances and wood construction sectors. “The technological development of smart screwdriving”, Nicola Bacchetta continued, “which is requested by automotive customers is an important stimulus, because it allows us to witness and be part of the developments which will eventually enter the general manufacturing sector”.

So what is meant by smart screwdriving? “It is a definition,” Nicola Bacchetta said, “ which we picked up, and which is closely related to the great theme of smart manufacturing; so it basically implies a revolution in production times and methods, bringing into the factory technologies and strategies which are part of the broader concept of Industry 4.0”. Industry 4.0 is based on three pillars: products, processes and people; what we try to do is to integrate these three aspects as much as possible. The industry defined 3.0 had brought information technology into the factory as early as the 1970s, but with 4.0 we are talking for the first time about robotics, sensors, interconnection and programming. “It is in the integration of all these aspects that we see a new industrial revolution,” Nicola Bacchetta said. The three technological clusters of smart manufacturing have been identified as: smart production, smart services and smart energy. By smart production we mean the new production technologies to improve the collaboration between operator and machines, with the aim of obtaining a better product. Regarding smart services, there is more and more talk of SaaS, software as a service, that is, an extension of the world of software and information infrastructure. Finally, the concept of smart energy, and therefore a constant attention to the containment of consumption and hence to environmental sustainability, is becoming more and more important.

“Here at Fiam”, Nicola Bacchetta continued, “we see a strong connection between smart and lean: both put the customer at the centre: for manufacturing companies like ours, it is important to be able to understand what added value we provide to our customers; and, secondly, the elimination of all those activities which actually generate waste”. These two concepts are combined, of course, with an increasingly developed and innovative technology, an enabling factor for an interconnected and intelligent factory, that is, a factory which performs much better and which is able to improve the collaboration between man and machine, a topic which is now essential and strongly considered. The smart features of a screw tightening system “A smart screwdriving system must have six features: interconnection, ergonomics, automation, monitoring, control and flexibility,” Nicola Bacchetta listed.
Interconnection means that systems should be integrated with the factory system, and should communicate and receive information; a modern MES production supervision system should have functions of data collection, phase progress control, resource management and I should also say product traceability. In order to do this, it is essential to have working tools, from numerical control machines to screw tightening systems, which are connected and which may exchange data. The instruments may be connected thanks to simple IO signals, therefore able to give signals of a quantitative nature, or have connections through serial or fieldbus protocols which can provide information of a qualitative nature, that is, they can understand how the tightening took place with respect to previously set allowances. The fact that the systems are connected allows you to perform setups or format changes quickly and automatically. “There is then the great theme of big data,” Nicola Bacchetta explained, “interconnected systems generate a huge volume of information, and it is not enough to provide the information, but you must also process it and make it usable. The management of so-called ‘Big Data’ can optimize and enhance the production processes already known and discover others worth investing in”.

Ergonomics is an increasingly important factor, because the attention paid to this aspect is growing considerably, going beyond the simple compliance with legislative obligations. An ergonomic screw tightening system is also smart, because it allows operators to work in environments where their health is protected for the benefit of greater production efficiency, and therefore greater quality of the finished product. Automation is one of the fundamental technological clusters, and it is one of the key terms of industry 4.0 also thanks to the advent of collaborative robots. “As far as screw tightening is concerned,” Nicola Bacchetta explained, “development in this sense has good potential for expansion: in 2019 it was estimated that only 3% of the cobots sold for manufacturing applications were for assembly, which also includes operations such as gluing and welding, so only a part of that 3% is actually dedicated to screwdriving. We as Fiam are sure that repetitive and tiring operations with little added value will have to be increasingly replaced in the future by automatic and robotized systems, for example a screwdriver connected to a cobot, as we are already starting to see”. Monitoring is important not only for the process in general, but also in a single step: in this case we speak of poka yoke tools (from the Japanese “poka”, mistake due to carelessness, and “yokeru”, avoid), that is, systems that highlight the error so that it is not spread and can be fixed. “The basic principle of a poka yoke device”, Nicola Bacchetta explained, “is actually to intercept a defect before it turns into an irreversible waste”. A way of working, therefore, in which the tools being used not only manage to report the error, but should even be able to prevent it. “Let’s imagine an operator,” Nicola Bacchetta continued, “who tightens an average of 5000 screws per day, how many possibilities of error are there? Many. That’s why smart devices are important to prevent mistakes and waste”. For instance, it is possible to install a control unit which controls the operations of one or more screwdrivers, makes sure that things are done in the right order, and is able to verify that all the screws required have been tightened correctly; in case of error the line is blocked and the reset is entrusted to the line manager, who also has the task of understanding the nature of the error.

There are also systems which control the position and sequence: if the screwdriver is not correctly positioned, the system is not enabled to start; or systems which verify the respect of the tightening torques provided in the specifications (allowance of ±10%), or which detect a possible damage to the thread (stripping or gripping). The last, and perhaps most important, feature which a smart screw tightening system must have is flexibility. The tools must be adaptable to variations in the production process, which are a constant in today’s manufacturing world. “Today,” Nicola Bacchetta stated, “ the market increasingly requires smart systems, especially because manufacturing companies work with low volumes, and very high variety and variability. Today we no longer produce ‘one size to fit everyone’: customers require a high degree of customization, this involves many variable lots in low volumes. So it is important to have flexible tools”. As regards screwdrivers, this means the possibility to change parameters, torque, angle and speed of screwing on demand, using programs established in advance or created in real time, automatically setting the desired screw tightening system, for example at a certain torque or speed. “Perhaps flexibility is the most important feature for Fiam screwdriving systems,” Nicola Bacchetta said, “because they are able to adapt to high levels of variability. The newly launched Fiam eTensil series electric screwdriving system has been designed to meet these demands of the world of highly customized screwdriving and assembly”. The eTensil range has a torque / angle control system which uses current absorption, an electronic technology offered by smart tools combined with advanced power supply and control units where the tightening torque is detected by the measurement of the current absorbed by the tool motor while the angle is measured through special hall sensors integrated in the tool itself. Practically it means that it is possible to adjust the torque and angle of tightening during the assembly phases by simply changing the relative parameter on the combined units and working in practice with a single screwdriver on different applications/components. A great advantage for operating flexibility. 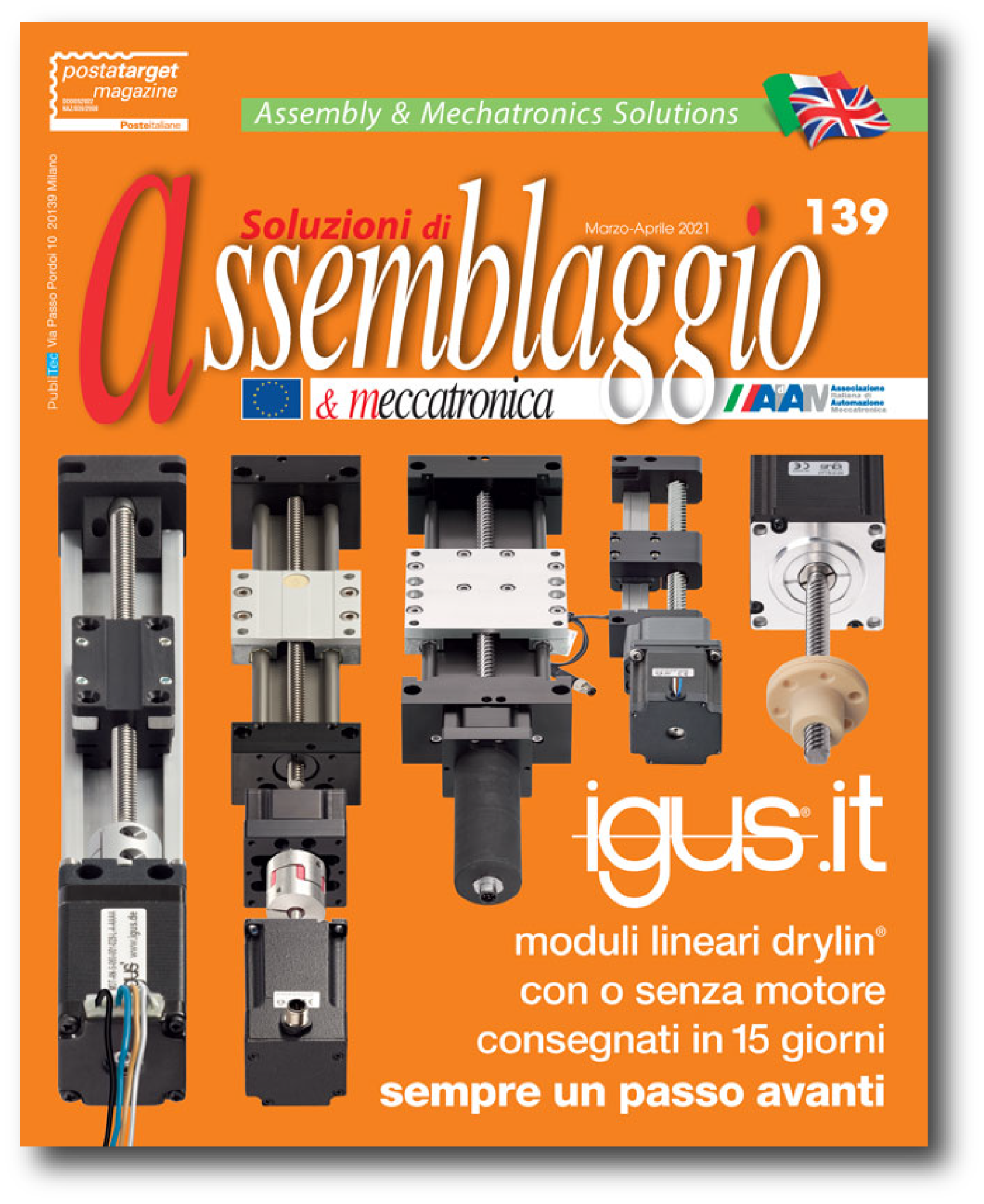