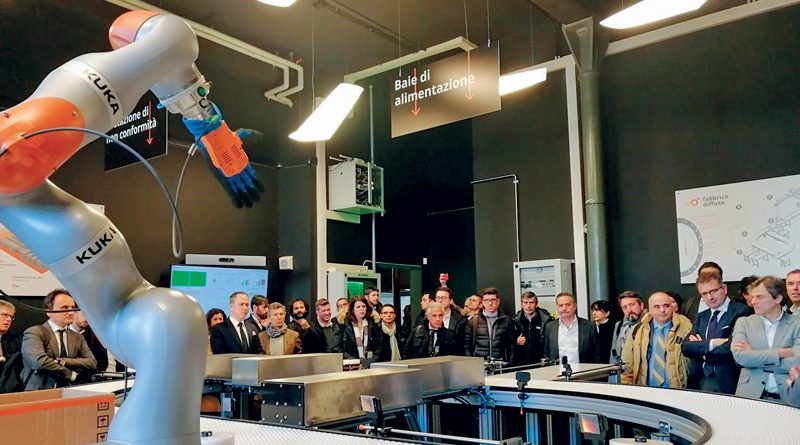 On January 30, ComoNExT, a technology park based in Lomazzo (Como), organized a morning presentation of the Fabbrica Diffusa project: a network of demonstrators, based in various Italian cities, with the aim of promoting the enabling technologies of Industry 4.0. In the Como center, the partner companies have recreated a palletizing and depalletizing system by integrating their technologies.

The conference dedicated to Fabbrica Diffusa, the Industry 4.0 demonstrator of ComoNExT, was held on January 30 in Lomazzo, in the province of Como. It can be defined as an “ideal factory”, but in practice it is a laboratory – open to companies and students – to demonstrate and make the audience experience the potential of Industry 4.0 technologies.
It is part of a wide-ranging project, which involves seven technology parks scattered throughout Italy, with the collaboration of technology hubs and universities: together they form a real distributed factory. The demonstrators are connected to each other through a video conferencing system, so as to allow simultaneous viewing of all the technologies. Each one has specialized in a particular sector or task, as if they were departments of a single plant.
Among the ComoNExT hubs and technology parks are: LIUC (in the province of Varese), which provides a space for research that simulates the operation of a lean factory called i-FAB; Cariplo Factory, based in Milan, which specializes in innovative design; 012 Factory, based in Caserta, which is building an automatic bottling line involving the use of artificial intelligence and data collection; Friuli Innovazione (Udine), for additive printing technology; HIT, Edmund Mach Foundation and ProM Facility, in Trentino, which deal with precision and automated agriculture and additive manufacturing.

ComoNExT specialization
ComoNExT specializes in logistics 4.0, therefore on the end of the production line. In this sense, they created a factory cell dedicated to palletizing and depalletizing operations with traditional and advanced technologies in symbiosis with each other. A Cartesian robot picks up and places boxes and objects on a conveyor belt, while a cobot orders them in anticipation of their exit. Cameras and visual detection algorithms catalog objects missing in the production database; radar sensors monitor the presence of operators and compliance with physical safety rules. Fog computing hosts all production data in a shared and secure way.
ComoNExT was inaugurated in 2010 by the Como Chamber of Commerce to encourage the relaunch and competitive development of the area by promoting the innovation culture. It is located inside the former Somaini Cotton Mill in Lomazzo, a late nineteenth century building, the redevelopment of which testifies to the desire to add value to the structure and the surrounding area.
Thirteen companies took the floor during the January 30 event. They quickly presented themselves and the solutions developed, which quickly became part of the Fabbrica Diffusa center. They all worked together in synergy to integrate their solutions and build an ideal and complete palletizing and depalletizing system.

Software at the service of factory 4.0
In a digital and smart factory, software take the stage: several companies have given their contribution to the demonstrator, each with a solution that meets specific needs.
Synesis is a European non-profit consortium company, which acts as a link between research and innovation in the industrial sector. In the ComoNExT demonstrator, it participates with the Deadalus Project: with a single program, it has been possible to build factory automation. Created for the diffusion of the IEC-61499 standard for distributed automation, it is an integration between OT and IT for the new generation of optimized logistics systems.
The concept of “fog computing” was introduced with Nebbiolo Technologies: a horizontal architecture closer to the machines, with more flexibility and less centralization; it seamlessly distributes computing resources and services, data storage, control and network functionality on the infrastructure connecting the Cloud to the IoT; all to speed up decision making operations. Nebbiolo Technologies implemented this structure in the demonstrator, with its fogOS and fogSM platform component software.
In Fabbrica Diffusa, it was also necessary to create and implement Business Intelligence, Management Control Systems, Machine Learning, Business Performance Management and everything revolving around these on Microsoft’s cloud platform, and it was Porini’s task. The company has integrated the hardware into the processes, so as to connect all the “pieces” of the factory, collect the line sensors and robots data, and move them to the Microsoft Azure cloud (integration with Field Service and BI). Thanks to the data collected in the cloud, statistical and predictive maintenance analyses can be made in real time.
Fabbrica Diffusa is also acquainted with the concept of “servitization”, that is the joint offer of products and services, which requires dedicated software; here comes Servitly. The company develops complete cloud-based software for the management of connected products, provision of Smart Services, support for the provision of Advanced Services, monetization of IoT data, generation of new revenues and transformation of products into services (Product-as-a-Service).

Movement from start to end of the line
How to move everything? What parts were included and what was needed? For energy production, Fabbrica Diffusa uses a Kaeser Compressori compressor, in particular the AIRCENTER SM 13 model. It is a plug & plays, compact and integrated system including a compressor unit, 7.5 kW and 11 bar, FAD 1 m3 / min, integrated dryer (clean air for every need), 270 l tank. It is managed by the SIGMA CONTROL 2 controller, which monitors alarms and warnings, and integrates a WebServer, which can be consulted via dedicated IP.
Robotunits provided the ComoNExT demonstrator with its Just-in-Time conveyor belts for handling the boxes. In addition, they also provided aluminum profiles with a single slot, which are therefore completely combinable and compatible with each other. It is a flexible and strong system at the same time, capable of supporting the weight of the line and the boxes moved.
The drives and motors for positioning the Cartesian robot have been supplied by ESA Automation: ECOTech series drives and 9MDSM series brushless motors. In addition, the ESA industrial PC hosts the application that displays and manages all the system data, from the start of the machine cycle to emergency warning and recovery.
In Fabbrica Diffusa, always with a view to creating a real factory, they also took care of the end of the line and what happens to the pallets: for this reason, SIAT has implemented its semi-automatic pallet wrapping system. It uses an IoT connection, in order to decentralize the system from the machine to the factory.

Safety between sensors and cobots
Of course, the issue of personal safety has not been overlooked, as in any proper factory.
Rite-Hite has provided safety barriers for the warehouse. They are capable to hold an average of 900 kg traveling at 4.5 km/h, and are easily opened to allow goods to be moved. In this case, the barriers separate people from the Cartesian robot and the winding system.
Not only mechanical protection: Inxpect offers the LBK System radar technology for monitoring dangerous areas; in particular, the radars were in the palletizing area. The system consists of: LBK-C22 controller, LBK-S01 sensors, Can bus communication, Inxpect software for parameters configuration.
Like any proper factory 4.0, there was also a collaborative robot, Kuka’s LBR iiwa, with Synesis and Nebbiolo Technologies applications. This collaborative robot is capable to detect tolerances in the positioning of the pieces, as well as the type of component. It has a load capacity of up to 14 kg, and is equipped with seven torque sensors. Its great advantage, being a cobot, is the possibility for the operator to work side by side without a protective cage. A Schunk gripping system has been applied to the Kuka cobot: the Co-Act EGL-C, which has a gripping force of up to 450 N and a gripping stroke of 42.55 mm. Together, it is possible to order the boxes in time, or collect objects to be inserted or removed.
The box detection model and the tracking algorithm are provided by Fluxedo: its system manages to detect position and residence time, and is equipped with an alert that warns the operator when the unloading bays are full. Fluxedo has also thought about operator safety; the Fluxedo system includes: a model for detecting the person as well as hands and arms, the definition of danger areas, the detection of danger situations, and a working real-time alert.
At the end of the presentations, the doors of the demonstrator and its “control room” were opened. It was thus possible to observe how the individual parts and software of the various companies integrate in practice. In the control room, on the other hand, there were the compressor and software working to manage all the mechanical and mechatronic parts of the demonstrator. 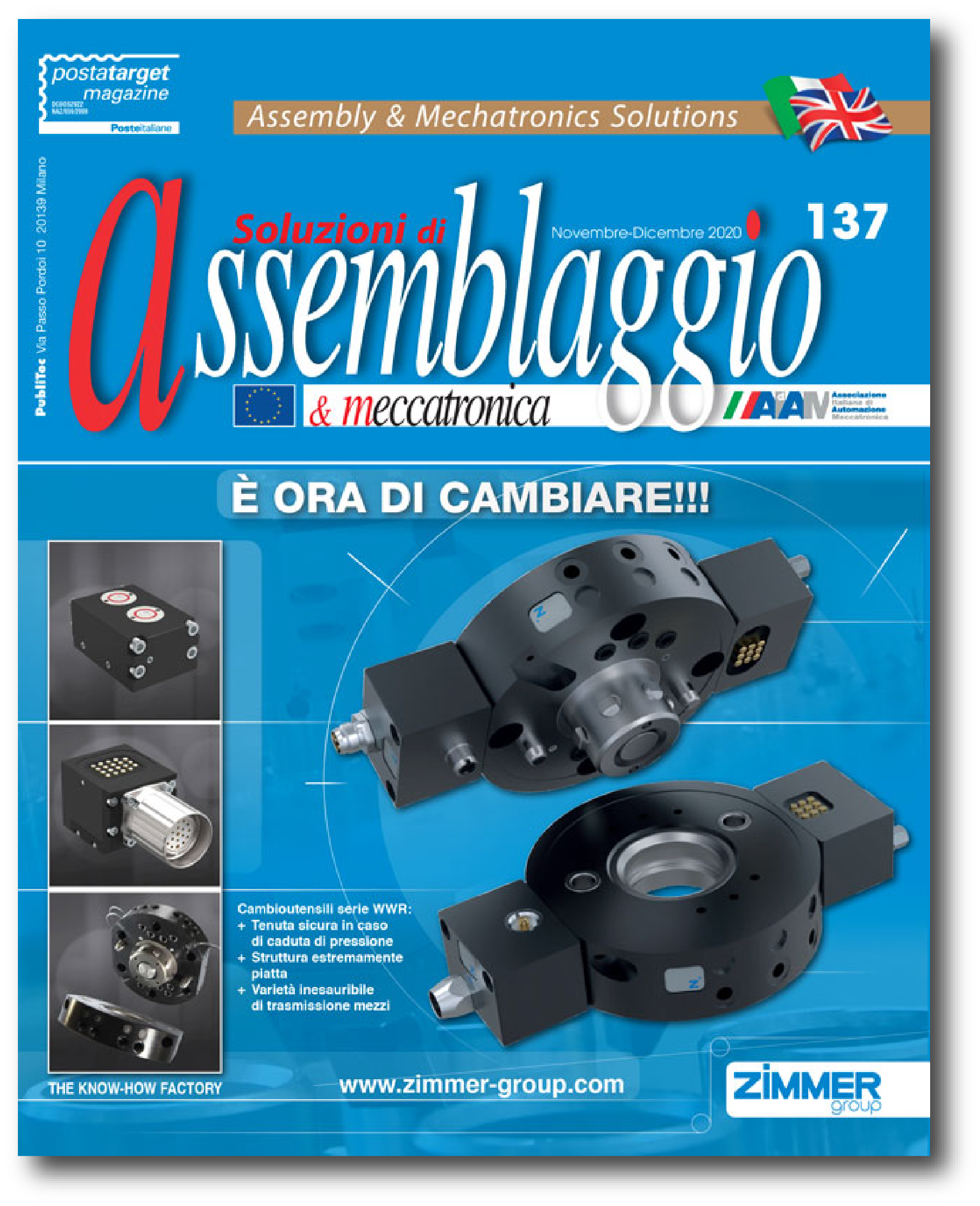